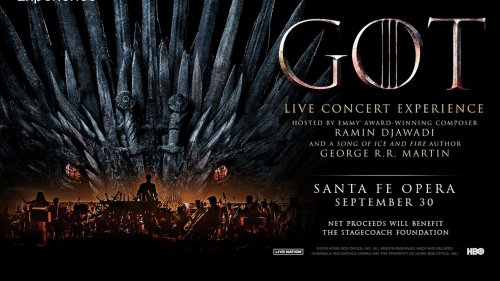 Courtesy of HBO, it looks like George R.R. Martin has taken the black:

It’s hard to make an argument against that (though Matt Weiner and Vince Gilligan can surely make them), but the honor does come with a very nice “oral history” of the episode, from its conception to completion, as told by executive producers David Benioff and Dan Weiss, as well as GRRM and Marshall. Some interesting details along the way, and it’s well worth reading.

However, we can say that one detail in the article seems to be an error—or, at least, was not sourced from the participants. Writer Brian Rafferty writes toward the end that “Martin is halfway” through the sixth novel. We contacted Martin’s office about this detail, to verify it, and have been informed that GRRM made no such statement. It may have been a misunderstanding or a mistaken assumption, but in any case, GRRM has not stated that he is “halfway” done with The Winds of Winter, the sixth novel of the “A Song of Ice and Fire” series.

read on >>
Posted at 12:29 CET by Elio
Comments: | PermaLink
A Forum of Ice and Fire
From the Store