Amazon.de, the German arm of the retail giant, has provided fans the first glimpse of the packaging for HBO’s boxset of the first season of Game of Thrones, which will be available in the U.S. on March 20th in both DVD and Blu-ray editions. 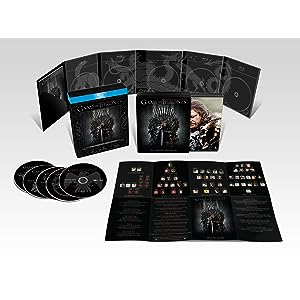 It’s certainly a pretty handsome box-set, and it looks to be quite feature-filled. The best part is that the bonus features can be seen, and suffice it to say, there’s plenty. Here’s a run-down:

A great collection. The most exciting items? The audio commentaries… and, we’d have to say, the Blu-Ray’s Complete Guide to Westeros and the promise that twenty-four “histories” will be presented by characters. That sounds potentially brilliant.

Thanks to Winter is Coming for bringing this to our attention.

Posted at 18:05 CET by Elio
Tags:
Game of Thrones | PermaLink