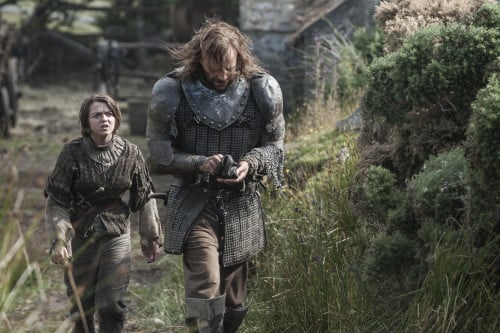 Last month, I had the opportunity to sit down with a number of the actors involved in Game of Thrones, to talk about the journey so far, and perhaps to draw out a few hints about what’s to come. First up in this interview series—leading up to and into the next season—I had the pleasure to talk with Maisie Williams (Arya Stark) and Rory McCann (Sandor Clegane), the latter of whom I’ve never had the pleasure of interviewing before. We have a chance to talk the joys of Vine, the pleasures of Iceland, and how their characters get along as season 4 commences.

Maisie, many people have mentioned you as a very impressive actress. Do you have any method you use, or have you just picked things up since you started the show?

Maisie: When all this started and I was cast as Arya, it was sort of because I “was” Arya and that kind of thing. When you’re that age, you’re not really acting, I guess, so you try to find someone who is similar to the role. Since then, I’ve worked with some fantastic actors and actresses, and I’ve learned so much from them. I’ve watched and learned how people make it more natural. At the beginning, I wasn’t too worried about what I was doing, and I try to keep to that because it worked then, and I hope it works now.

How does it feel not to get to act with Sophie?

Maisie: I still see Sophie all the time when we’re filming. We crossover a lot this season, actually, as we were filming at the same time a lot of the time. It was really great to see her at the hotel and things. I was in New York recently and she was shooting a film there, and we both went to a fashion show together. We still do loads of great things. She’s doing fantastically, and we get on so well. It’s great to also have that escape of hanging out together, because most of the scenes we do on the show are really, really intense so it’s nice to just go home and make stupid vine videos and things like that.

To read the rest of the interview, visit our Features!

Posted at 19:13 CET by Elio
Tags:
Game of Thrones | PermaLink