We’ve previously announced the news that Bantam will be publishing a poster map collection titled The Lands of Ice and Fire (Pre-order: Amazon US, Amazon UK) that will provide the most extensive look at the setting yet, all of it based on George R.R: Martin’s own map designs. It’s presently scheduled to be published in October of this year. 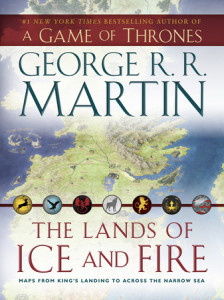 Now we’ve some more information we can share, courtesy of Random House :

The centerpiece of this gorgeous collection is guaranteed to be a must-have for any fan: the complete map of the known world, joining the lands of the Seven Kingdoms and the lands across the Narrow Sea for the first time in series history. But this is just one of many unique maps that aren’t available anywhere else. There is an alternate version that tracks the movements of the series’ protagonists throughout their vast world, along with more detailed versions of the western, middle, and eastern thirds of the world; a full map of Westeros, combining North and South; one of the Dothraki Sea and the Red Wastes; and the Braavos city map. And here, too, are fan favorites detailing everything from urban sprawl to untamed wilds: maps of King’s Landing; The Wall and Beyond the Wall; the Free Cities; and Slaver’s Bay, Valyria, and Sothyros.

The maps will be drawn by the experienced, freelance cartographer Jonathan Roberts. Having seen his preliminary layout of Braavos based on a map from GRRM that was done quite early in writing A Feast for Crows and was consequently not entirely consistent with what he described in the novels, Roberts definitely knows what he’s about. Fans will have nothing to worry about as far as the quality of the presentation and illustration goes.

Posted at 18:42 CET by Linda
Tags:
A Song of Ice and Fire • Licensed Products | PermaLink