Although George announced his completion of work on The World of Ice and Fire (Pre-order: Amazon US, Amazon UK) in a post on Not a Blog last week, Linda and I have held off a similar post because our side of things wasn’t yet quite done: a sidebar we felt was important needed adding, an afterword needed tweaking, and GRRM’s Iron Islands material needed trimming… 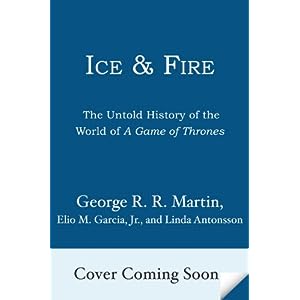 But now all that is done, and outside of art approvals, final copy edits, and the like, Linda and I are essentially done as well. From 2004, when the subject of such a book was first broached while having dinner with George and Parris in Santa Fe, to 2006 when bidding among publishers finally led to our signing a contract with Bantam in 2006, it’s been a long effort—not a continuous one, mind, after the initial discussion, outlining, and the very first draft, as the bulk of the work waited until A Dance with Dragons was more or less done and George had more time to consult. Consult he did, and he made a number of contributions which, as Tolkien before him said, “grew in the telling”. Some of these narratives have since been published in partially abridged form—“The Princess and the Queen” in Dangerous Women (Order: Amazon UK), “The Rogue Prince” in the forthcoming Rogues (Pre-order: Amazon UK).

The lengthy histories of various Targaryen kings, queens, princes and princesses, may well see the light of day in their unabridged form in what our editor Anne Groell first called the GRRMarillion, and which George has now taken to calling Fire and Blood. But that’s for later, after the series is done, according to current plans. The World of Ice and Fire will offer shorter versions of everything George wrote and which could not be directly included, containing essential information, curious details, and more, boiling the histories down to their essences… and providing a lot of brand new information along the way, adding considerable depth to fan’s knowledge of the history of the Targaryens.

And not just the Targaryens: each region of the Seven Kingdoms, and many of the lands and cities of Essos, the Summer Isles, and Sothoryos, have sections devoted to them (including mysterious areas first introduced to fans in The Lands of Ice and Fire). There’ll be maps aplenty along the way, ably illustrated by Michael Gellatly, and scores upon scores of illustrations by artists both long experienced with the world of A Song of Ice and Fire (such as Marc Simonetti, Michael Komarck, Magali Villeneuve, and Ted Nasmith) and new (you’ll have to discover those on your own!)

While art is still being completed, The World of Ice and Fire looks pretty locked in to its late Autumn date (an ideal time for the holiday season). We’ll make one remark, though: the cover George shared on his Not a Blog post was one of a number of early mockups, and is not the final art. For one thing, Marc Simonetti has since done an Iron Throne much closer to GRRM’s vision, which will of course be used in the book.

And one more detail we should share: after some recent fluctuation, I’m told a full and final title has been settled on this past week after discussion: The World of Ice and Fire: The Untold History of Westeros and the Game of Thrones.