After a whirlwind of travel to Ireland from Sweden, then back for two days before going to Northern Ireland, I’m sufficiently recovered to try to (briefly) cover the amazing time Linda and I had at Dublin 2019 and that I then had at Titancon, the 2019 Eurocon. I probably spent more time chatting with George since ... hmm, maybe 2015 when George visited Sweden and Åland. Much to report, but I really, really want to try to be succinct. So as a general overview, I’ll just say it was fantastic, filled with meeting old friends from the Brotherhood without Banners fan group and making new acquaintances from the ASoIaF/GoT sphere. Many discussions were had—on the SF/F genre, on the Hugo awards past and present, on Worldcon bids, and of course on various matters related to ASoIaF. 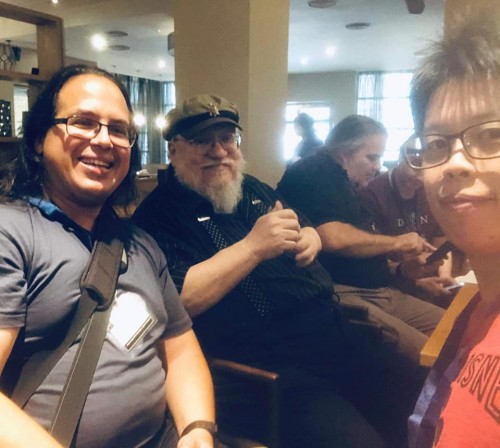 The first significant event with GRRM was the Wild Cards trivia panel with a host of writers: Walter Jon Williams from the original writers and roleplayers was teamed with Carrie Vaughn, the much-in-demand Wild Cards trivia guru and writer Kevin Andrew Murphy was teamed with Charles Stross and Mary Anne Mohanraj, and Peadar Ó Guilín was joined by Paul Cornell. It was very amusing!

The highly-anticipated trailer for season 7 of Game of Thrones has landed after HBO and EW teased with new photos and the release of the official poster.

There are dragons. And maps. And spoilers, of course.

Posted at 18:50 CET by Elio
Comments: | PermaLink
A Forum of Ice and Fire
The Citadel
Blood of Dragons