Continuing our journey through Northern Ireland in pursuit of the Game of Thrones doors, our trip took us to Newcastle on the coast and then across the southern reaches of the country to gorgeous County Fermanagh and the lovely town of Enniskillen:

After a lunch and a bit of a gawk at The Percy French with Slieve Donard and the Irish Sea in the background, the trip to Enniskillen was long and rewarding. As Linda explains in the video, Blakes of the Hollow is quite remarkable: the original pub in front still retains much of its original charms, including a stone countertop from the era. However, it has grown over the decades, and a regular at the pub volunteered to lead us around to additional bars, function spaces, and a very well-regarded (and quite beautifully appointed) restaurant called CafÃ© Merlot beneath it. One regular wanted his picture taken and when I said that it’d cost him a pint, he ordered a Guinness up directly (alas, I don’t drink beer and had to put a stop to it—though the devotion to Guinness in Northern Ireland made me tempted to at least give it a try!)

It was quite a long day for us, so we stayed on the shores of Lough Erne. Despite on again-off again rain, the sun came out and let us have quite a beautiful walk as the picture below can attest. Lough Erne’s noteworthy as having served as an RAF base for Catalina seaplanes during World War 2. One American pilot called it “the most beautiful runway in the world”, which we can well believe. The squadron was instrumental in finding the German battleship Bismarck after it nearly escaped pursuit, leading to its sinking. 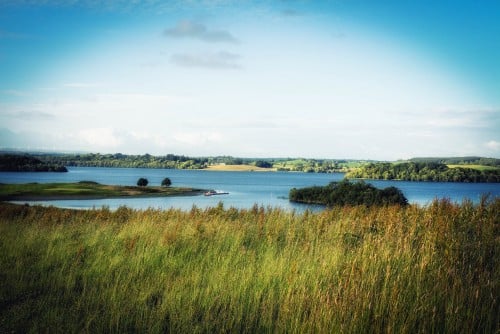 Beautiful nature around there, to say the least. Linda spotted an ewe and her lamb and tried to have a conversation with them, and at one point a hare carefully surveyed the area ... and then suddenly its mate leapt out of the grass in front of us and they both went racing off. It was a fine cap to a terrific day! Tomorrow, we’ll discuss the 5th and 6th doors which are particularly fond memories for us.