Recent Entries
Archives
Official Sites
Featured Sites
May 11, 2022
Fantasy Recommendation: All The Seas of the World

Occasionally, we like to recommend works of fantasy to our fellow fans of A Song of Ice and Fire, and the upcoming release of All the Seas of the World by Guy Gavriel Kay (hits shelves on May 17th) is something we’d like to bring to our readers’ attention. Thanks to Kay and his publisher, Linda and I had the chance to read the novel early. Below, you’ll find Linda’s review of the novel (consider it co-signed by me!), but in brief: a compelling, beautifully poignant work from one of the finest authors working in the genre (and one of our very favorites in any genre!) 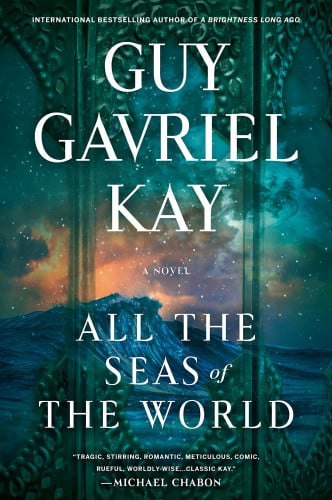 In All the Seas of the World, Kay returns once more to his most frequently revisited alternate history setting, where the stories often touch upon the tensions between the followers of the three major religions: the Asharites (Muslims), the Jaddites (Christians) and the Kindath (Jews). I have not consciously reflected on this before, but when reading this book, I started thinking more about the choice of having these three religions be celestial, worshipping the stars, the sun and the two moons respectively. To me, it heightens the tragedy and futility inherent in religious conflicts that their objects of worship are essentially the same things, seen in the same sky, which is an obvious parallel to the Judeo-Christian deity shared by all three of our equivalent religions.

While the shared universe connects this novel to several of Kay’s earlier works, it is with the two most recent books—Children of Earth and Sky and A Brightness Long Ago—that it is most closely entwined, especially the latter, as it recounts the complicated, often-bloody history of conflict in something like the late 15th century as the growing power of the Asharites threatens (and eventually overwhelms) the great city of Sarantium and changes the entire balance of power around the Middle Sea. Note: this does not mean this is the last novel in a trilogy in the sense that you need to read the books in order, or even read all of them, as they tell standalone narratives ... but it is something of a thematic trilogy, revisiting the same milieu and some of the same characters and examining them in different ways.
The book opens only some five years after the end of the main action of A Brightness Long Ago, but just as that novel did, this one moves back and forth in time, offering glimpses of what lays ahead at the end of the road for some of the characters. There are also several references to both The Lions of Al-Rassan and the Sarantine Mosaic, touching on the idea of one’s legacy in the world, something which has been a recurring theme in Kay’s work.

But the most prominent theme of All the Seas of the World is the telling of stories. Who tells the tale? To whom is the tale told? Which stories end up being told and who is placed at the center of the stories or at its margins? In revisiting this setting a few years down the road from A Brightness Long Ago, Kay picks up a few peripheral threads and moves characters from the margins to the center of the story. At the same time, other peripheral players are introduced, and we are given a few glimpses of their lives. Regularly, the narrator of the story (who is not, as in Brightness, identified as one of the characters) muses almost obsessively on whose stories are told, recognizing that while some lives will appear trivial within the grander tapestry, they will matter just as much in a different kind of story.

“You can indeed die at the margins of a story, but you are as dead as if it were your own tale ending and never told.”

Is this Kay expressing that he’s moved beyond telling the stories of larger-than-life characters such as Ammar and Rodrigo? Granted, Folco and Theobaldo are certainly very vivid presences within Brightness, but not quite on the same level, nor are they the main characters. Part of me does long for the more epic kind of story still, but perhaps they can only be told so many times, at least by the same person? Or is it that Kay has chosen to remain within the same setting (and, in the case of the last three novels, within a relatively short span of time in that setting) specifically to explore more “minor” threads as well?

Speaking of the revisiting of the same setting, I think it may pose a small problem for (some) readers of All the Seas of the World in regards to the many interconnections and references to the two previous novels. These do, at times, threaten to take the focus from the characters of this story, both because they bring to mind other characters and because, if you’re anything like me, you may end up interrupting your reading to chase down a reference.

That said, the craft with which this tapestry is woven is exquisite on all levels, both when it comes to the current story and the threads picked up from previous novels. When Kay chooses to show a few short glimpses of what happens to a minor character, those glimpses are enough for you to care about their fate.

Posted at 16:58 CET by Elio
Tags: Review, Guy Gavriel Kay, Fantasy, All The Seas of the World | PermaLink