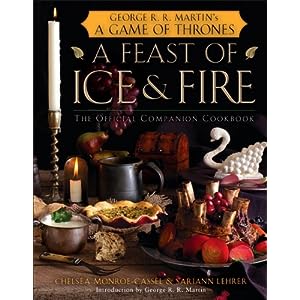 The two women behind it all, Chelsea Monroe-Cassel and Sariann Lehrer, started their foray into the food of Westeros—and Essos!—by way of a blog, Inn at the Crossroads, around the time of the first season of Game of Thrones. Their attempts to recreate favourite dishes from the books eventually caught the attention of George R.R. Martin and this led to the book that now has been released, just in time for your Game of Thrones season finale parties.

Since we have been so busy with covering the second season of the show, we have only managed to cook a few of the dishes for ourselves so far. However, during one of my dieting phases in the past, I got into the habit of reading cookbooks for fun—I know, I am a masochist—and I was very happy to resurrect that particular habit to go through this volume.

My favourite part is how the dishes in the book are all organised by region (there is also an index at the back that organises them by type) to give a sense of the flavours of each part of the Seven Kingdoms and beyond. This makes it more interesting for fans of the books, and in terms of planning a meal or a feast it gives you easy access to ready-made themes. Most of the dishes also come with suggestions for which other dishes that they combine well with. There’s a good mix of recipes, from breakfasts to meals of every size to mouthwatering desserts. There’s even quite a few beverages, not to mention a bevy of baked goods.

The general approach of the authors has been to try and find a medieval recipe that more or less matches a a meal from the books. These recipes have then been modernised as needed in terms of ingredients as well as prepration methods, though the book often provides excerpts of the actual medieval recipes as well. In addition to this, many dishes are represented by two recipes: one modified medieval recipe and one more modern recipe, many times created by the authors themselves. Their descriptions give a good sense of the qualities of each version, though no doubt many will want to test that out for themselves by cooking both!

Being particular fans of Dorne in the books, Elio and I headed immediately for the section on Dornish food. First, we cooked the breakfast with eggs, peppers and onion. This a filling but not heavy dish, full of wonderful flavours, especially if you like a bit of heat which we certainly do. The eggs, in particular, come out really well. The amount of heat is easily regulated by your choice of peppers, and there’s a fine suggested mix that gives you a meal with a good level of heat from start to finish by mixing different types of peppers. Our second choice was the flatbread based on a traditional Turkish recipe. We found this one easy and fun to bake, as well as a great complement to soups which we eat quite often.

If you find yourself thinking that Medieval recipes might prove too challenging in terms of what ingredients are needed, you need not worry. A chapter at the beginning of the book discusses some of the more unusual—but still easily available—ingredients as well as provides suggestions for replacements for harder-to-source products. The same flexible approach is present in the recipes themselves where you are often given suggestions for variations or optional ingredients. With this sort of help along the way, you really don’t have to be an expert cook to enjoy this book. While some of the recipes are more challenging, there are plenty available for less savvy cooks to tackle as well. If you are metric, like me, you’ll need to do some converting, but that’s a minor hassle.

The cookbook is definitely a treat both for fans of A Song of Ice and Fire and those interested in an unusual, historically-inspired collection of recipes. Fans of the books will appreciate the quotes that introduce each dish, in case they need a reminder of where a certain dish appeared. Of course, for those who have not yet read all the books and are really concerned about any spoilers at all, it might be worth noting that there are some potential minor spoilers buried in these quotes since some of the do reveal who is alive by a certain book. In terms of research, the book feels well-grounded and the authors have done an impressive job digging up historical dishes that closely match the dishes described in the books.

So while you’re pining for the next book or the next season, why not comfort yourself by eating in the style of your favourite character or favourite region? This book should offer you plenty of appealing options to do so.

A Feast of Ice and Fire ((Order Now: US, US Kindle, Amazon UK)) can be found on shelves in bookstores across the US, and is available for ordering from major online retailers such as Amazon.

Posted at 22:39 CET by Linda
Tags:
A Song of Ice and Fire • Licensed Products | PermaLink