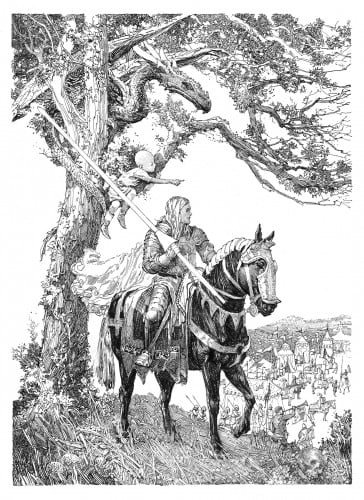 If the series goes forward, it will be interesting to see if it’ll be a limited series simply adapting the current novellas (and perhaps the fourth, which was set in Winterfell and concerned itself with the “she-wolves”, a group of women of House Stark at a time when the Starks of Winterfell were in a precarious dynastic situation), or if the show will delve beyond them into areas where Martin has only sketched out their history. Over a week ago, GRRM noted that he had been “sitting down with some amazing screenwriters and showrunners” developing potential Game of Thrones successors, and we guess Conrad has met with George to get his feedback.

Interestingly, this past week we reported on details from a new HBO tell-all named Tinderbox where George was quoted as having originally pitched Dunk & Egg to HBO, only for them to at that time not be interested in them. Times, it seems, have changed.