We have updated our episode guide for this week’s latest episode, “Second Sons”, with our usual complete recap, analysis, and book-to-screen break down. Enjoy!

This week’s extra video over at our Youtube channel may be delayed a day, as we’re a little short on time for recording.

Week after week, Game of Thrones‘s third season has been beating ratings expectations. It hurdled over the 5 million initial airing viewership mark with last week’s excellent episode, “Kissed by Fire”, hitting 5.3 million viewers… and this week? According to TV by the Number, it looks like “The Climb” wins the night with an unprecedented 5.5 million viewers. At this rate, I think it quite likely that the season finale could well clear 6 million viewers.

The second showing also added 1.27 million viewers, bringing the total who watched it on TV to 6.77 million.

It’s always a pleasure to interview writer and story editor Bryan Cogman, who has so far written an episode of each season, including what are amounting to two of our personal favorites of the series: “What is Dead May Never Die” and his season three episode, “Kissed by Fire”. 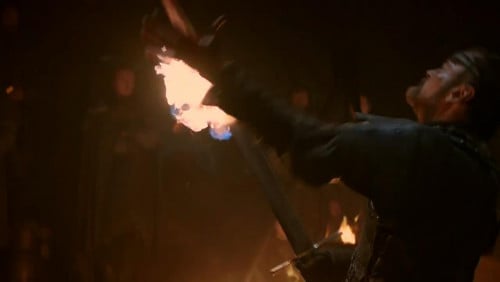 Below, I talk with Bryan about the episode, the introduction of new characters, his proudest moments, and much more. It’s a lengthy one but, we hope, a good one. Enjoy!

All right, thanks so much for taking the time, first off!

Now, often episodes seem to have their titles decided at the last minute—George’s episode went through a couple of different names before it was settled. Was “Kissed by Fire” always the title you preferred for your episode?

“Yeah, this one found its title earlier than my previous two.  I think I hit upon it as we were shooting the Beric/Hound duel.  While it’s not always easy or possible to have one unifying theme in an episode, I realized this one most certainly had a unifying element or image, if you will. Of course there’s the line of dialogue it came from, but you have the fiery sword, the fire imagery in the Selyse scenes, the wildfire and “burn them all” of Jaime’s monologue, etc…”
“And it’s always fun to give the episode titles that excite or are familiar to the fan base—I’ve done with all my episodes so far. I think Season Three has a lot of those.”

To read the rest, go to the full interview.

UPDATE: We’ve now posted the recap and analysis of “Kissed by Fire”.

As HBO only provided us the first four episodes of the new season, from here on out our Game of Thrones episode guides will get update only after the initial airing. We hope to be able to get at least the analysis and book-to-screen up by the time the west coast airing is completed, but the extensive recap tends to take rather longer than that, and will probably not appear until later on Monday.

Until then, however, we’ve now posted our book to screen information on the episode guide for “Kissed by Fire”.

Access Hollywood have again been at it with some excellent Game of Thrones coverage this year, and we’d thought we should share two recent interviews we’ve particularly enjoyed. First, Mackenzie Crook—who plays Orell, a wildling skinchanger (which, for mysterious reasons, has been simplified to just being a warg—those of you with a bit of knowledge of Germanic or Scandinavian languages, past or present, may understand why this is an inaccuracy)—is finally interviewed at length about his experience of the production and just a bit about his character.

Second, one of the most entertaining actors in the production is Liam Cunningham, who plays Ser Davos Seaworth, who discusses his character’s miraculous survival in this video interview: 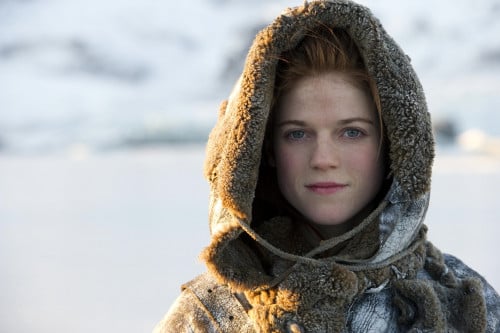 David Peterson, creator of the Dothraki language, has written an article for CNN revealing that the producers of Game of Thrones hired him to create two dialects of Valyrian, the ancient language of Valyria: High Valyrian and Low Valyrian. Though it’s light on specific details, it gives a great sense of the process of differentiating one version from another.

Having watched the first four episodes, we can say categorically that Peterson’s done a fantastic job. It sounds quite remarkable in the mouths of the actors who speak it at length.

Continuing our series of interviews, this time it’s Iain Glen on board. Playing Jorah Mormont, he may be rather (a lot) different from the character in the novels, but the dignity and gravity he brings to his performance is a terrific counter-point to Daenerys Targaryen’s youthful energy and determination. In the below interview, we touch on topics such as his luck in filming locations, his views on the violence in the show, and just how Jorah feels about Daenerys. 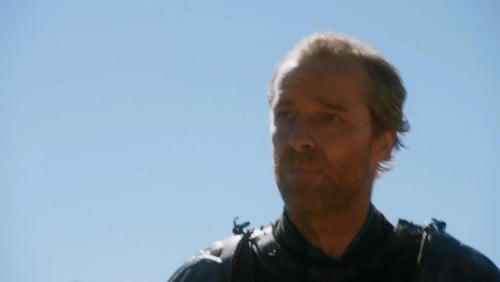 “I think it’s really about building our power base, about whether Daenerys is going to become a real power. Last season we almost starved to death and then we survived. So with the growth of the dragons, and the conquering of various people on the way… I suppose I should say that there’s always been this sense about Dany that she’s on her way toward the top, and you really see this movement in season 3. We’re on our way.”

Want the rest? Read the interview!

Last week, we received the first four episodes of season 3 of Game of Thrones to review, courtesy of HBO. While our individual episode reviews and coverage will be held until the corresponding episodes air, it has become something of a tradition to share our general impressions of those early episodes. We did it for the first season, and we did it for the second season, so it seemed only right to do it again. The process of discussing even vague impressions will probably reveal some semi-spoilers, so reading on isn’t going to be a good idea if you prefer to stay unspoiled! 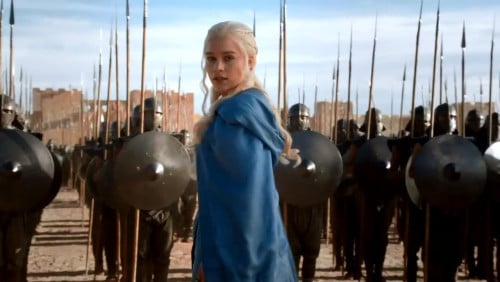 But lets just give a general summing up first, and get into the nitty gritty after: these four episodes are on the whole quite good; not perfect, but they may well be the strongest first four episodes as a whole for the series to date (certainly, they’re stronger as a unit than last season’s first four, though none of them are as good as “What is Dead May Never Die”). Some of our biggest fears going into this season seem, so far, to be unfounded. But there are some issues, such as the fact that a number of the anticipated new characters are rather underwhelming when they finally hit the screen and that there are one or two (largely invented) storylines that don’t really feel like they’re gelling for us.  Still, each subsequent episode goes from strength to strength, each one better than the last. So why do we feel cautiously optimistic? We recall that last season, too, the third and fourth episodes impressed us the most and left us pretty excited about what was to come… and then the cracks started to show and real problems developed that led to some major disappointments. Four episodes in a show like this is not enough to really gauge how the rest of the season will be, especially in terms of how well they’ll translate what’s in the novels to the screen.

Want to read the rest? Read it here!

Posted at 23:11 CET by Elio
Comments: | PermaLink
From The Red Carpet…

... of HBO’s opening of the traveling exhibit in New York City (more details below), our intrepid reported Ameli captured some pictures of the cast who were present, as well as some of the exhibits (plus a great photo of herself on the Iron Throne—much better than the one I have, from when I visited the set!). And more than that, she had a chance to ask some of the cast members a few quick questions as they shuffled along the carpet. See their answers below!

Now up is the third in our series of actor interviews leading up to the premiere of Game of Thrones on March 31st (April 1st in the UK, Scandinavia, and elsewhere). This time around, it’s an interview with the always-personable Nikolaj Coster-Waldau, who plays Jaime Lannister, the Kingslayer. Read below as he discusses Jaime’s relationships with Cerseia and Brienne, the ways that Jaime defines himself, and more! 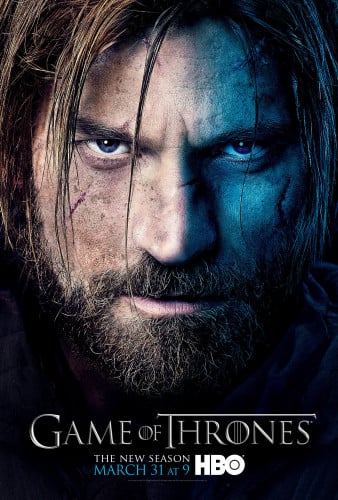 And as it happens, this is also our third interview with Nikolaj to date, and he remains as charming and entertaining as always. The interview transcript below doesn’t really go very far to indicate just how engaging he can be to talk with, and how funny. Despite the provison from HBO that details for season 3 were not really permitted to be discussed, Nikolaj provided some small suggestions about how the story may go in the course of discussing the series, his character, and the fans.

So, what can you tell us about the new season?

“Well, this guy gets killed… what’s his name…  I can’t tell you anything, really. But I’ll say this much, as it’s not giving anything away really, is that when I was first approached for this I talked to the guys and they told me about Jaime. And I always hoped we’d get to season three, based on that.”

UPDATE: We’ve just learned that Rory McCann, who played the Hound, will be present at the premiere and the associated festivities!

Live in Sweden? Interested in being one of the privileged few who’ll watch the first episode of Game of Thrones on March 26th, almost a week earlier than everyone else? Thanks to HBO Nordic, you have a chance! See below for the full details (in Swedish, naturally):

Nice—HBO has released a new tease for season 3…. which is all about war, naturally. It gives us our very first good look at Noah Taylor as Locke (a new character introduced to take over some of the function of Vargo Hoat). Is it just me, or is anyone else wondering if he has six fingers on one hand?

EW, with its bevy of exclusive interviews now being posted, has gone the extra mile: it latest issue is a Game of Thrones extravaganza, starting right with its cover featuring Kit Harington and Emilia Clarke in costume as Jon Snow and Daenerys Targaryen. 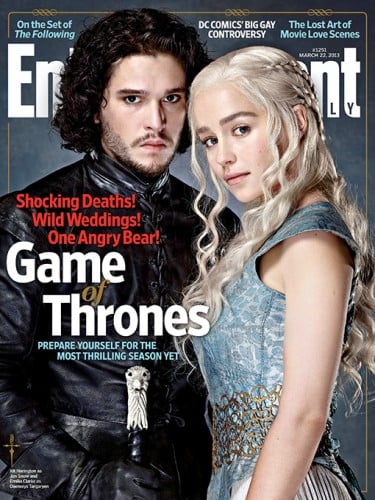 EW has more information about what to expect… including a nice, spoilerish synopsis of some season highlights:

read on >>
Posted at 15:26 CET by Elio
Comments: | PermaLink
HBO Sends Out a Synopsis

So, eager to hear a little bit about what the first episode will reveal to those watching? HBO teases the season premiere episode “Valar Dohaeris”, and runs through a lengthy list of notable returning and new cast members, in a press release they’ve sent to the media. As there’s spoilers herein, to some degree, we’re just going to put everything under the cut… so click on through!