With Nikolaj Coster-Waldau, Bryan Cogman’s been the member of the Game of Thrones production we’ve had most opportunities to interview, and as always it’s been a pleasure as we range around various behind-the-scenes aspects of the production, as well as some in-depth discussion of Bryan’s work as a writer for this season in regards to “Oathkeeper” and “The Laws of Gods and Men”>.  See below for the full interview, as we discuss filming in Iceland, the growth of the scale of the production since the early days, who Bryan’s idol is, and more!

All right, welcome back to what’s turning into an annual chat, Bryan. I think Nikolaj’s the only person we’ve interviewed as often at this point.

Hah. As I recall, this season included your first trip to Iceland for filming—usually none of your material was shot there, is that right? 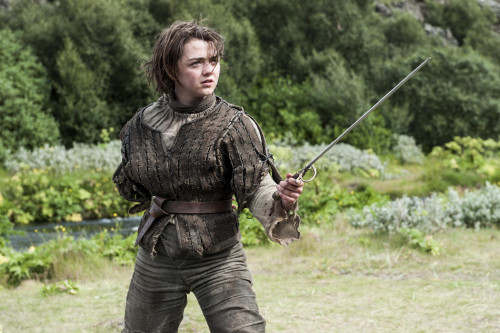 Trying to think… ah, there was one bit from “Kissed By Fire”—the encounter with Jon and Orell just before he and Ygritte go into the cave.  That was Iceland.  But, then again, D&D wrote most of that bit…  And, of course, the interior of the cave was a soundstage in Belfast.  So, yeah!  Got to do Iceland.  Funnily enough, though, apart from one scene, all the season four Iceland stuff features in D&D’s episodes.  But I had the huge honor of being the sole writer covering the Iceland unit this year (apart from the Tormund/Styr scene in 401—D&D flew in to direct that).
The one scene shot in Iceland from my episodes is the dragon popping out of that gorge. But, then again, I wasn’t on set for that!  I was with Michelle on the other unit shooting the Arya/Hound water dancing scene. That location with all the waterfalls is maybe the most beautiful place I’ve ever been. Iceland just looks like another world.  The landscapes, they’re just a bit different, a bit fantastical, so it fit what we’re doing perfectly.

Iceland really looks stunning. This time around the shooting was in the summer. Lots of sunlight, relatively warm weather?

(Click here for the rest of the interview in our Features section!)

Posted at 21:56 CET by Elio
Tags:
Game of Thrones | PermaLink