This summer, Amazon announced the formation of a new imprint dedicated to the publication of graphic novels: Jet City Comics. 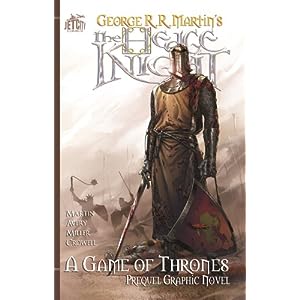 With this news came the announcement of the initial slate of comics that would be published by Jet City, a slate which featured the works of George R.R. Martin quite heavily. First up among them is Meathouse Man, adapted by artist Raya Golden from Martin’s disturbing science fiction tale in an imagined future where corpses are reanimated as the servants, and playthings, of men. That’s due in October…

... but for fans of A Song of Ice and Fire, it gets better: Jet City will be republishing The Hedge Knight graphic novel (adapted by Ben Avery and Mike S. Miller) in November, and following that up with the republication of The Sworn Sword by the same team in January.

And then, to cap it off? The third Dunk & Egg story, “The Mystery Knight”, is due to finally be adapted to comics—once more by the team of Avery and Miller—for Random House, publishers of the A Song of Ice and Fire series and—with Dynamite—of the comic book adaptation of the same.

Posted at 19:40 CET by Linda
Tags:
A Song of Ice and Fire • Other Books and Projects • Licensed Products | PermaLink