Sky Atlantic, home of Game of Thrones in the UK, and chef director Dan Doherty of the Duck and Waffle have teamed up with UK delivery service Deliveroo to present “The Drama Kitchen”, a pop-up takeaway which will be open from this evening to Sunday evening. The idea behind the concept? The 12 different meals available to order are all inspired by some of Sky Atlantic’s shows… including, of course, Game of Thrones. 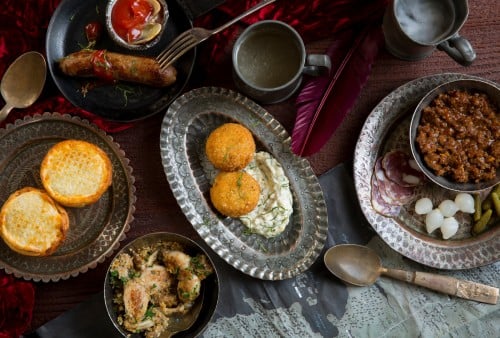 See the Game of Thrones menu created for The Drama Kitchen:

Take a culinary tour of the Seven Kingdoms, from Flea Bottom to the swamps of the Neck, in this seven course tasting menu - ‘Lamprey’ Pie, Crannogmen Supper, Ramsay’s Chop, Catch of the Canals, Bowl o’ Brown, Gored Baratheon Boar and a Flagon at the Crossroads. A feast worth fighting for.

That photo makes it all look quite delicious, although here’s hoping Bowl o’ Brown excludes human flesh! For those interested in ordering, note that availability is restricted geographically:

Food from ‘The Drama Kitchen’ will be freshly prepared using specially sourced ingredients at the Social Pantry in Battersea, London and in the interest of the quality of the food, this is only available in the Battersea, Wandsworth and some areas of Clapham, as per its usual Deliveroo delivery area.

“The Drama Kitchen” will be open from January 26 to January 29.

Posted at 18:12 CET by Elio
Tags:
Game of Thrones | PermaLink