Ahead of the Game of Thrones final season, Random House Audio has for the first time released A Game of Thrones—Juego de tronos—as a Spanish-language audio book for the Latin American market. The rest of the series, as well as Fire and Blood (Fuego y sangre) will be released from now to September 2019.

Juego de tronos has released today, and is available at a number of vendors—most notably Audible.com, which gives new members two free audio books when they sign up for a membership.

You can read the press release below, which reveals that all the books will be read by famous Mexican voice actor Víctor Manuel Espinoza, the voice of Homer Simpson for millions of Latin Americans: 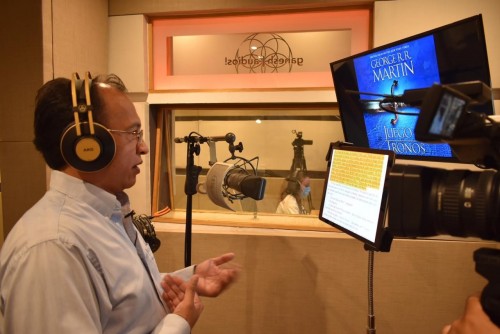 Fans of George R.R. Martin’s epic fantasy series A Song of Ice and Fire will now be able to hear the audiobooks in a new language: Spanish. Penguin Random House Audio will release Spanish-language audiobooks of the bestselling series beginning this spring, just as the final season of the hit TV series premieres.

Espinoza said, “Recording the A Song of Ice and Fire audiobooks has been a great challenge for me. Interpreting each character and representing so many personalities through my voice has been the most complex and most satisfying part of the process.”

George R.R. Martin is the #1 New York Times bestselling author of many novels, including the acclaimed series A Song of Ice and Fire, which began in 1996 with A Game of Thrones and has since become a worldwide phenomenon, selling over 85 million copies worldwide in 47 languages.