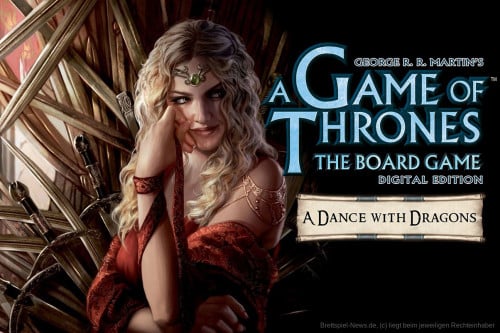 WINTER IS HERE! A GAME OF THRONES: THE BOARD GAME - DIGITAL EDITION COMES TO MOBILE DEVICES TODAY
A DANCE WITH DRAGONS DLC ALSO DEBUTS ON PC AND MOBILE, ESCALATING CONFLICT WITHIN THE SEVEN KINGDOMS

Deep Strategies, Cunning Tactics and Familiar Characters Collide in the Digital Editions of the Popular Board Game with the New A Dance With Dragons DLC, Available Now

Developed by Dire Wolf Digital, A Game of Thrones: The Board Game - Digital Edition is an adaptation of Fantasy Flight Games’ top-selling strategy board game, which is based on the deep lore of George R. R. Martin’s A Song of Ice and Fire. The game offers unique story-driven challenges set during the War of the Five Kings, the massive conflict in which the six Great Houses of Westeros must face off against one another to claim the throne. Employing a combination of strategic planning, warfare, betrayal, cooperation, masterful diplomacy and military might, players take control of one of six Houses of Westeros (Lannister, Stark, Greyjoy, Martell, Tyrell or Baratheon) to seize the crown over the span of 10 rounds. Completely tailored for iOS and Android devices, the mobile version of the game will also feature asynchronous gameplay, online and offline (solo) modes, a reworked UI and cross-platform multiplayer—giving mobile players the ability to challenge, or work alongside, PC and Mac players.

Inspired by George R. R. Martin’s fifth novel in the A Song of Ice and Fire fantasy series, the A Dance with Dragons DLC features escalated conflict resulting from a shift in the balance of power; Westeros has been ravaged by war, the Baratheons are pushed up North, the Greyjoys plague the ocean and the Lannisters control King’s Landing. Offering a new gameplay setup, the DLC pits players at each other’s throats from the beginning - radically changing the game with an expert six-round scenario. With 64 new character cards, replacing the previous characters in each House, players can explore new strategies and cunning tactics.

You will find all the visual and PR materials available here.