The fight for the Iron Throne continues in A Clash of Kings, the second title in The Folio Society’s best-selling A Song of Ice and Fire saga. Described by George R. R. Martin as ‘masterpieces of the bookmaker’s art’, these are the ultimate editions of this generation’s most celebrated fantasy series.

The story explodes off the page, starting just where A Game of Thrones left off: the King is dead and Westeros has been thrown into the chaos of a civil war. Robb Stark has been declared ‘King in the North’, but he knows he will have to fight for his life to keep that title safe. To the east, Daenerys Targaryen turns her eye towards the Iron Throne. With fire and blood, she will take back what was stolen from her…

Award-winning artist Jonathan Burton returns with sixteen stunning colour illustrations including four double-page spreads, fully immersing the reader in the grandeur and drama of the Seven Kingdoms. Each chapter heading is decorated with an individually designed character emblem.The bindings, blocked in blue and a fierce orange, illustrate the devastating conflicts between the Starks, the Greyjoys and the two Baratheon brothers. The slipcase also holds a surprise – the fiery and terrifying portrait of Melisandre, the red priestess of R’hllor.

The endpapers are emblazoned with the sigils of each of the Houses, while the genealogies have been updated to reflect the births, deaths and new alliances since the events of A Game of Thrones. The Kings also have dedicated entries, with genealogies and descriptions of their banners. Every detail in this spectacular collector’s edition promises an experience that both new and returning readers will delight in. 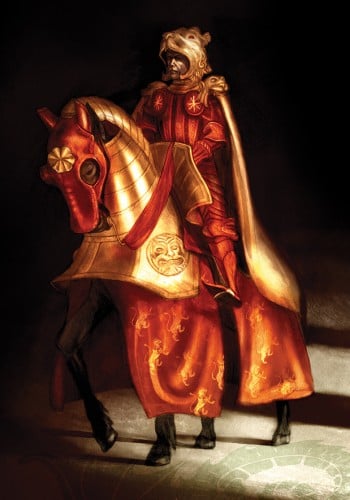 And here, from the second volume, is a striking rendition of Tywin Lannister in all his pageantry riding into the throne room of the Red Keep following the Battle of the Blackwater. The gold and crimson hues are gorgeous.