Fascinating image of King Jaehaerys I, the Old King, at the Great Council of 101 AC. Also pictured (from left to right) are: Prince Viserys Targaryen, his wife Lady Aemma of House Arryn, Lord Commander of the Kingsguard Ser Ryam Redwyne, Lord Corlys Velaryon the Sea Snake, and Rhaenys Targaryen the Queen Who Never Was.

Of course, adaptation means changes, and this particular image is fascinating for the many quite minor changes from Fire and Blood all packed together: Jaehaerys did not actually attend the Great Council, had a very long beard and long hair, wore a circlet with seven previous stones around it, the Targaryen sigil should have two legs rather than four (more on that later), and Rhaenys Targaryen famously had black hair (being half-Baratheon).

We note this not as a critique, but just an observation that the show’s adaptation needs are going to lead to more such changes, both small and large. 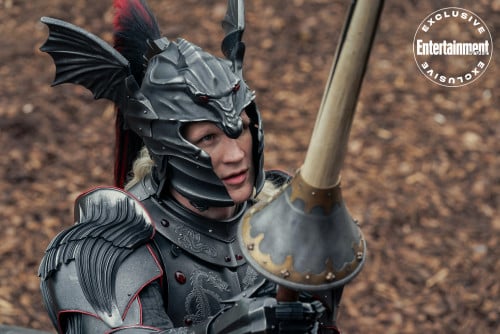 Our first good look at Prince Daemon Targaryen’s fantasic helmet. Note the garnets or rubies decorating the armor here and there, and the etched (two-legged) dragon. His face being largely unprotected is madness, bravado… or the reality of productions not wanting to cover up the faces of their lead actors (The Mandalorian not withstanding.)

Along with its main article, EW has gone ahead and released additional galleries and articles, with writer Nick Romano promising new pieces daily all leading up to SDCC. Here’s a list and some comments:

Finally, there’s a couple of video that EW has added to its Youtube channel that we’ll include here:

More content is sure to come from both HBO and EW in the next few days, so keep an eye out! As to our verdict? House of the Dragon looks incredibly promising, with sumptuous costuming, impeccable production design, enthusiastic actors, and a highly capable creative team.