A whirlwind visit to London—we spent less than 24 hours there, and got very little sleep indeed—saw Linda and I at the world premiere of season 5 of Game of Thrones at the historic Tower of London. As Dan Weiss would say in a specially prepared video (neither he nor David Benioff was in attendance, claiming too much work finishing up season 5), the Tower was the “throniest” place they could think of at which to have a premiere. Thanks to the good offices of Sky, it was a spectacular occasion, filled with projected displays, costumed caterers, a Dornish-themed party, an enormous group of actors (35 actors from the show, past and present, were in attendance according to HBO CEO Richard Plepler; we’re fairly sure that this was the largest public gathering of the show’s cast to date), and of course the first episode of season 5, “The Wars to Come”. 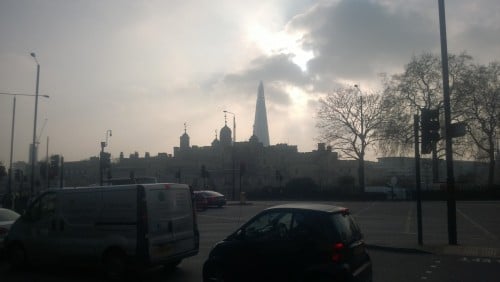 As it happens, this is not really a review. Various U.K. newspapers were very quick to scrape out reviews and commentary, some more spoiler-filled than others, and you can go look at them if you really want someone’s measured opinion (for the most part, it seems the press was enthusiastic). Because of the circumstances of our trip—very early flight, little time to get ready, little time to rest—for my part I think I was a bit too tired to really be fully attentive to the episode. My habit of checking my watch was at first an effort to just track the pace of the episode and try and help fix in memory sequences of eventsâ`¦ but eventually it was simply the distraction of a wandering attention. Linda, on the other hand, was more well-rested, and she felt her attention wandering as well. Perhaps it was the experience of watching it in a packed theatre? That might be it, as it’d be a new experience and the novelty of it may have been distracting, but we’ve another thought.

Now, most (not all) of the reviews on the media have focused on the pace being good. But when we discussed the episode afterward—not just Linda and I, but also various acquaintances at the party—we largely seemed in agreement that the episode simply had the usual first episode problem: too much catching up needed, too many characters and storylines to touch base on, to give anything a very strong through-line. This is the nature of the beast, of course: it is an enormous cast, and there are a lot of storylines to touch base on. So when we think about the question of whether it was truly well-pacedâ`¦ well, no first episode since “Winter is Coming” can honestly claim that, not even last season’s “Two Swords” which did make great efforts to avoid the pitfalls but did not entirely succeed.

So the real question is: was the episode as well-paced as it could be, given what was stacked against it? Based on that one, somewhat-absentminded viewing, I’ll tentatively say yes. It’ll be interesting to see how I feel about it when I’ve the opportunity to see it again.

But all that said, it seems like an episode that largely accomplished what it set out to do: get viewers (mostly) back up to speed. We might quibble and think that perhaps a couple of the lighter stories could have waited an episode to allow more room for some key narrative threads (and it’s worth mentioning that this is one of the shortest premiere episodes in the show’s history), but perhaps the second episode is jam-packed and it would be a disservice; again, we’ll have to wait and see. Production-wise, the amazing spectacle continues with some remarkable visual effects wizardy used to render an epic moment or two. Every penny is on the screen, there’s no doubt about that.

Once we get a proper chance to watch it, we’ll give a proper review, but until then this will have to doâ`¦ well, this and a video we’re going to make discussing one particular aspect of this episode: significant departures from the novels. Linda and I will discuss a handful of notable changes presented in this episode, changes that mark some real shifts in character motivations or plot action, so expect spoilers.