Thanks to the good graces of HBO Nordic, Linda and I travelled to Stockholm this past Friday to take a look at the Game of Thrones exhibit in KungstrÃ¤dgÃ¥rden. A quick train trip from Gothenburg and after checking in to our hotel we took a walk over to the park, where we meet our press contact who got us our press passes. We had arrived too late to take part in the panel with Coster-Waldau, but Nikolaj has been a frequent interviewee of our site already so not a big deal, we thought. 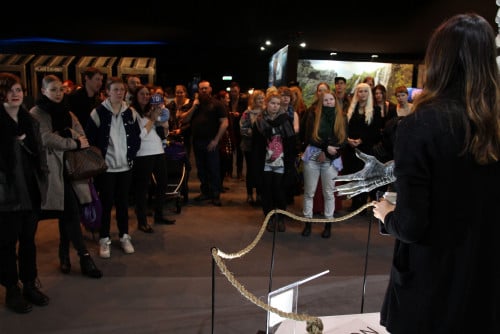 The exhibit is housed in a large tent in the middle of the park, which extends down to one of the more scenic views of Stockholm’s glorious waterfront—though with the grey, windy weather, it wasn’t all that beautiful at the time. Ushered in, we were greeted first by a few heraldic banners, and then a mass of costumes, armor, weapons, and props that ran the gamut from all four seasons of HBO’s hit show… and even into the fifth season.  Naturally, we took many pictures.

While there, Nikolaj came in to do a series of television and radio interviews, but before they started he came by to chat with Linda (who he’d not met before, but evidently recognized) and I. He remarked that the Oculus Rift-driven Wall experience was particularly amazing and wondered if we’d tried it (we had.) And then back to interviews for him, and back to looking around for a bit more. During this time, Elana Loewenthal of HBO introduced herself, revealing that she was largely responsible with arranging the exhibit and its contents. She was particularly helpful, discussing some of the thinking behind the story of the exhibit—the way things were laid out in conjunction with one another—and the little hints of season 5 they were able to work into the show with the permission of executive producers David Benioff & Dan Weiss. Afterward, she said we’d see her again at the opening party held in a nearby gallery….

But before the party, we had one more task. We headed outside to gather up winners of a contest we ran for early entry into the exhibit. That included some confusion over just where we were supposed to meet, thanks to there being not one but two statues in the park, and my mistaking two proselytizing Jehovah’s Witnesses for fellow fans (they very politely turned down my offer to get them into the exhibit anyways). 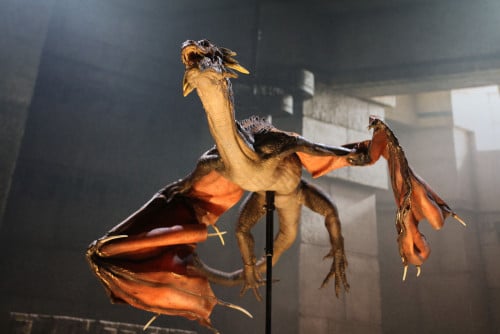 Loewenthal personally provided a guided tour of the exhibit to fans, pointing out some details that weren’t necessarily well-known to fans, such as the fact that the Drogon maquette was used in the first couple of seasons but then the size of the dragons required that they start just using simpler green models roughly approximating the heads of the dragons, and that the feathers in the “dark Sansa” dress unveiled toward the end of season 4 were all quite real. The group of fans with us seemed very enthusiastic, especially about the opportunity to take pictures on the Iron Throne and to try out the Wall experience. Here’s a quick video montage of some what we saw while there:

Once that was all said and done, we took our leave to change for the party. But before we could join the festivities, we were told we should head back to the exhibition tent. Nothing was really new there, but I did decide to become wightified while in fancy dress. After some mingling, it was back to the party which proved crowded, loud, and well-stocked in alcohol and canapÃ©s. At the party, we also had the great pleasure of meeting Harry Lloyd (aka Viserys Targaryen), who (it turned out) had been very excited in turn at the possibility of meeting us(!). We remember his portrayal of Viserys quite fondly, not least because of the fact that he immersed himself in the novels to try and construct a backstory to explain why Viserys was as he was.Harry and his partner-in-crime, Jayne Hong, both had a long talk with us (turns out they knew about as many people at the party as we did). They were both eager to chat with us about all manner of things, and revealed to us that they were soon ready to release a mockumentary-style web series titled Supreme Tweeter, where Harry plays a version of himself who ends up becoming embroiled in social media when North Korean dictator Kim Jong-un becomes a… fan, lets say, of his portrayal as Prince Viserys. It sounds like there’ll be some fun cameos from people fans of Game of Thrones will recognize. Supreme Tweeter will start release on April Fool’s Day.

In fact, when the party started to wind down and we all realized that canapÃ©s were no substitute for a proper meal, we all decamped for dinner at a nearby (and very good) Italian restaurant, where we ate and chatted until past midnight. It was an excellent time, and Harry shared some interesting Game of Thrones tidbits such as his watching Roger Allam learn to flawlessly perform his speech to Drogo in Dothraki… only for them to go with an English-language take. Or the fact that he had suggested to David and Dan that Viserys’s confrontation with Jorah include his throwing into Mormont’s face the fact that he was in love with Daenerys. We also learned that he’s been hanging out with George on occasion, since his current series Manhattan (a period piece about the development of the atomic bomb in Los Alamos) films in Santa Fe, and he noted that in fact his father is acquainted with George as he was a publisher with HarperCollins and is now a literary agent. Other topics of discussion fared more widely: British accents (Harry shifted through a dizzying number—quite a party trick!), dogs, console games (Harry was quite the console gamer in his youth), the strangeness of North Korea’s media strategy, Doctor Who, Korea’s Hangul alphabet, and more.

All in all, it was a great evening. HBO Nordic informs us that the Stockholm exhibit has been a huge success, with hours-long lines for the opening day on Saturday; apparently, if everyone who noted on Facebook that they planned to attend actually showed up, there’d be a sizable amount of people simply unable to get in. The exhibit wraps up this Wednesday, March 11th, and will next appear in Tel Aviv in April.