February 19 sees the release of the Game of Thrones Complete Second Season setin the US, and March 4th should see it out in the UK and more widely in Europe (Pre-order: US Bluray, US DVD, UK Bluray, UK DVD). 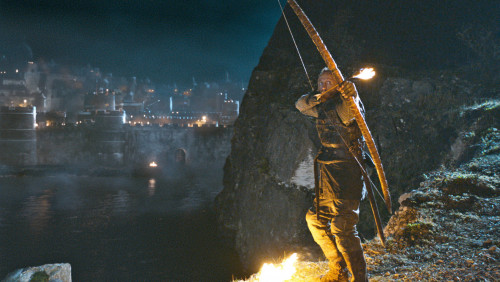 For those anticipating it, we’ve shared clips and details, but thanks to HBO, we’ve had the opportunity to get an early review copy. In brief, it lives up to the production values of the previous season, and in some places (such as the Histories, which I consider my personal favorite extra) exceeds them. The Blu-ray set is a showcase of the show’s very high production values, revealing it in the full glory of 1080p.

Fans will rush to the commentaries, certainly, and there’s an excellent variety available among the twelve(!) commentaries for nine of the ten episodes (quite sadly, The Ghost of Harrenhal has no commentary; sadly because I would have been pleased to see some explanation for some of the things that took place in that episode) with some episodes getting two sets of commentaries. Actors—like the Stark kids again, and the amusing Dinklage and Headey (friends in real life, and showing that familiarity to hilarious effect)—are well-represented, as are directors, producers, and writers. Of particular interest to many will be Neil Marshal’s commentary on “Blackwater” alongside Headey and Dinklage, with some interesting bits about production details and even the little grace notes involved in something like the use of a wind machine to get a curtain to subtly move in a breeze. (And no, he does not share the anecdote he shared with Empire Magazine).  This goes together well with the Making of Blackwater documentary, which is very much focused on the production side, and is a testament to the show’s ambitions and amazing crew and stunts team.

George R.R. Martin’s commentary for the same episode is rather interesting in its own way, especially if you’ve not read the novels but are curious about them: he spends a good deal of time pointing out differences between the episode and what he wrote in the books, and also provides some hints about differences between the script as he wrote it and how it came to be filmed in the end. I had to smile in particular at his grousing about all the main cast failing to don their helmets, a point he’s particularly fanatical about both as a “purist” (his own word, folks!) for medieval combat and because of his first filmed script for The Twilight Zone (an adaptation of Roger Zelazny’s “The Last Defender of Camelot”) featured a knightly combat that, though choreographed by professional stuntmen, ended up leading to one of the stunt men having part of his nose cut off(!).

Besides the commentaries, the actors also feature in the Inner Circle feature (we’ve linked to a clip above, from an earlier post), a round-table featuring Benioff and Weiss speaking with actors Lena Headey, Michelle Fairley, Emilia Clarke, Kit Harington, and Liam Cunningham as they discuss the season and their characters, while we hear from a number of other actors in the character profiles (which focus on new characters, like Stannis, as well as on some central royal figures like Joffrey, Dany, and Robb). Interactive features include the In-Episode Guides, which provide brief profiles of characters in a scene, as well as on the location where the scene is taking place, and quick access to the (awesome) histories as they get unlocked in the course of an episode, and a pretty nifty War of the Five Kings feature that helps track the activities of all the kings in the course of the war. Nicely done!

One of the most anticipated parts for hardcore fans are the dragon eggs, which featured actor auditions hidden throughout the episodes. The eggs are back, but the audition reels are not… instead, we’re finally being treated to deleted scenes that didn’t make the final, aired episodes. Now, last year, it wasn’t that hard to find these once you learned the trick of it: just have the pop-up menu up with the feature banner scrolled down, and start fast-forwarding through episodes, and eventually the dragon egg or an arrow would show up indicating a location where there was an egg. This year, it’s much more difficult, and such tricks don’t really work. That said, with some persistence (and an aching thumb as I went around pushing buttons and directional controls scene by scene and segment by segment), I did find three of them; we’ve no idea how many in total there are. One of these scenes may well please fans of Sansa and Sandor, another provides another look at the aftermath of an important event featuring Ser Loras and his sister Margaery, and the third relates to a rather… murderous turn of events in Dany’s storyline. We’ve had hints of all these scenes from interviews and comments made by actors and producers, so it’s nice to see them at last. That said, I’m not sure how much longer the “hidden extras” thing has legs. Once was fun, but this second time has been, frankly, rather tedious. My suggestion to HBO? No hidden extras. Or maybe just one hidden extra, something special. But asking people to wear out their thumb through multiple episodes and special features five, six, or seven times (whatever the actual number is) is a bit much.

A new thing this season is that the Bluray also comes with DVD copies of the episodes, though these are quite barebones and burned o to plain, double-sided DVDS. Perhaps more interestingly, in this day and age, is the access to downloadable or streamed digital copies. This feature is US Only, and uses the Ultraviolet authentication system to verify your access and then arranging for downloading via your preferred video service (options are iTunes, Vudu, and Flixster).

All told, it’s an impressive package, full of content that extends the re-watchability of episodes and the set itself by quite a bit. It’s definitely a show that puts every penny it spends up on the screen, and there’s no better way to experience that than in high-definition. Fans of the show will definitely want to get a hold of the Bluray, if they can—the DVDs are perfectly nice, and contain the commentaries, but miss out on many of the special features such as the War of the Five Kings and the Histories and Lore material.