George R.R. Martin has posted a new entry to his Not a Blog, titled “Back in Westeros”, which discusses the self-imposed isolation he’s been in for much of the year. In a mountain cabin somewhere in the mountains of New Mexico, George has been making progress on The Winds of Winter, and reflects on how the periods in his career where he’s been the most isolated have also been among his most productive.

Towards the end, he gets a little more specific about what he has been working on lately in terms of point of view characters, and one of the one he names is a bit of new information as their presence as a POV had not been confirmed until now.

(No, this is not actually his cabin!)

George R. R. Martin’s Fire and Blood has now been released in paperback both in the US and the UK. This history of the Targaryens from the Conquest to the end of the regency of Aegon III has seen some updates to it in this new edition, most notably through the addition of five new images from artist Doug Wheatley.

Before Linda and I headed out on vacation, we were approached by our publisher to record a brief series of travelogue videos focused on The World of Ice and Fire. The first of these was very recently unveiled, highlighting the people, sights, and cuisine of the North:

A few more of these to come in the coming weeks!

George R.R. Martin and Random House have announced the November publication date of A Storm of Swords: The Illustrated Edition. The cover maintains the same style as the two previous editions, but art this time around is being provided by the fantastic Gary Gianni, who has previously illustrated the A Knight of the Seven Kingdoms collection, the 2014 A Song of Ice and Fire Calendar, and the Subterranean Press limited edition of Fire & Blood. The lithograph-style image below, published on GRRM’s Twitter account, is gorgeous:

Over at Not a Blog, George R.R. Martin has shared thoughts on the close of Game of Thrones, how it might be compared to his plans for the final two novels in A Song of Ice and Fire, and more. Well worth a read as a reminiscence and commentary for those who wonder about these things. It’s been a long road for George, for everyone who worked on or covered the show, and for the tens (hundreds?) of millions around the world who’ve watched it.

I had the great privilege to accompany George and Parris to a visit to the set as the first season filmed (the image above comes from that visit, George and I moving down a dark hallway in the Paint Hall studio, led by Bryan Cogman to one of the several sets in that colossal space).

Fire & Blood, George R.R. Martin’s history of the Targaryen dynasty that grew out of The World of Ice and Fire, is among the finalists for the 2019 Locus Award. Hosted by the venerable Locus Magazine, the award has a large body of voters between its subscribers (whose votes are given extra weight) and the public who also take part in the vote, and is considered one of the three most significant awards in the genre alongside the Hugo and the Nebula.

With all the attention on Game of Thrones, it seems this great talk at the Jean Cocteau Cinema between George R.R. Martin and noted literary novelist (and now fantasist, with his Black Leopard, Red Wolf) Marlon James, moderated by Dr. Andrea L. Mays, slipped under the radar. While we’ve added it to the So Spake Martin collection, it’s worth having a post of its own so we’ve embedded it below.

Following in the footsteps of the recent The World Hobbit Project and The World Star Wars Project, a group of 40 university researchers have just launched The Game of Thrones Research Project, aiming to capture the views and opinions of thousands of viewers and fans of the series through an online survey.

“Winter is coming”. Game of Thrones’ most famous saying. But what does it suggest and mean to you? We’re trying to gather the views of thousands of followers of the series, on this and a series of other questions, via a web survey at this address: www.questeros.org. Please, help us by visiting and completing it â`“ and then passing it on. Who are we? We are a gathering of university researchers sharing an interest in the changing nature of ‘fantasy’. We’re entirely self-funded. We’re not affiliated with HBO in any way, or with George RR Martin. All our results and findings will be made publicly available â`“ that’s a promise. If you’d like to know more about us, about the project, and why we are doing it, you can find more information on our website. Take the quiz now at www.questeros.org!

The website, with the very clever domain name of questeros.org, offers more in-depth information about what they seek to learn from the survey and how they intend to publish the results. Looking at the survey, it is (as the name would suggest) focused on the TV series, but it does include some questions that relate to—or can be related to—the novels and the TV series relationship with them. They estimate that it takes about 20 minutes to take the survey, depending on how detailed you make your responses (there’s several questions which allow for longer answers), and we encourage all of our readers to take a look at it and contribute your opinions.

Random House have just announced that the first in a series of digital, enhanced editions of George R.R. Martin’s A Song of Ice and Fire series has been released exclusively for Apple’s iBooks. 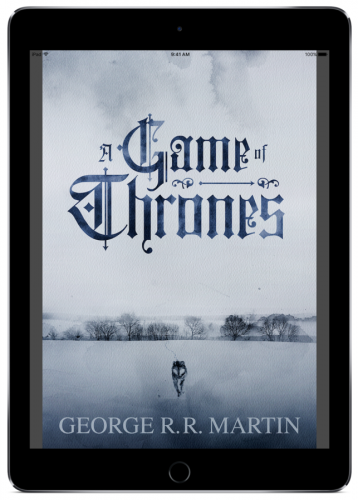 Featuring new cover art, numerous illustrations, enhanced maps, sigils, a glossary, and detailed annotations to provide a richer experienced for readers, and to help guide new readers through the dizzying number of characters and locations in the novels. As it happens, Linda and I have known all about this for awhile, since we’ve worked with Random House and Apple on the project—it’s been a really interesting, often very complicated, project!

There’s a lot more information, so here’s Random House’s press release. A tip, however, for those who simply can’t wait and read through it all: if you have iTunes installed, make sure to visit Apple’s launch site for an exclusive video interview with GRRM about the novels and the project, which features some really cool animation:

Last night, we posted about the Game of Thrones-themed Sports Illustrated Power Issue. We now have the podcast—hosted by Richard Deitsch—with GRRM, which you can find here along with a partial transcript of some of Martin’s remarks.

It’s very much sports-oriented, but there’s some remarks that touch on the characters and the setting (such as Martin’s comparison of knights to athletes).

We’ve placed this interview in the So Spake Martin collection, where you’ll find a great deal of links to interviews, correspondence, and reports from readings, panels, and conventions.

This past weekend, George R.R. Martin was at Boskone. A few reports have floated around since then, regarding his signing, the Q&A… and a reading he did of material from not one, but two chapters from The Winds of Winter. Thanks to a fan, we now have a pretty detailed rundown of what was contained in those chapters over at the A Song of Ice and Fire Forum. You can read it here, but in case it needs to be said, there are some definite spoilers therein!

For reports of other readings from Martin, and discussion of chapters he’s released on his website, you can go to our The Winds of Winter sub-forum.