Over at George R.R. Martin’s “Not A Blog”, faithful minion Raya revealed the artist behind this summer’s forthcoming the A Song of Ice and Fire 2018 Calendar, as well as an image of the cover of the calendar featuring Victarion Grejoy in his plate armor and kraken helm. 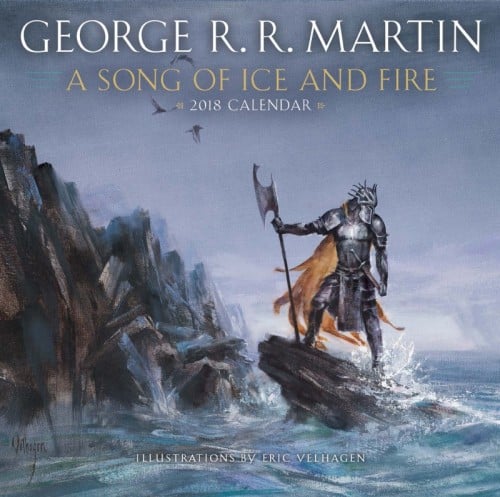 The artist, Eric Velhagen—do check out his personal site with its extensive gallery!—has been twice nominated for the Chesley Awards, the premiere awards for the SF&F genre, and has been published in the prestigious Spectrum series of art books.

We also have some hints of the subjects Velhagen will be depicting in the calendar, courtesy of Random House:

Winter is here. In the 2018 entry of this annual calendar series spanning A Game of Thrones and the entire Song of Ice and Fire saga, acclaimed illustrator Eric Velhagen delivers one of the most atmospheric and otherworldly visions yet of George R. R. Martin’s masterwork. From the rough seas of the Iron Islands and the blinding snows of the North to the fiery rebirth of the Mother of Dragons, Velhagen’s moody, textured artwork will remind fans that the most original series in fantasy is just warming up.

The A Song of Ice and Fire 2018 Calendar is due to be published July 18th.

Posted at 22:01 CET by Elio
Comments: | PermaLink
A Forum of Ice and Fire
The Citadel
Blood of Dragons