Last night, we posted about the Game of Thrones-themed Sports Illustrated Power Issue. We now have the podcast—hosted by Richard Deitsch—with GRRM, which you can find here along with a partial transcript of some of Martin’s remarks.

It’s very much sports-oriented, but there’s some remarks that touch on the characters and the setting (such as Martin’s comparison of knights to athletes).

We’ve placed this interview in the So Spake Martin collection, where you’ll find a great deal of links to interviews, correspondence, and reports from readings, panels, and conventions.

This past weekend, George R.R. Martin was at Boskone. A few reports have floated around since then, regarding his signing, the Q&A… and a reading he did of material from not one, but two chapters from The Winds of Winter. Thanks to a fan, we now have a pretty detailed rundown of what was contained in those chapters over at the A Song of Ice and Fire Forum. You can read it here, but in case it needs to be said, there are some definite spoilers therein!

For reports of other readings from Martin, and discussion of chapters he’s released on his website, you can go to our The Winds of Winter sub-forum.

We’ve noted this previously, but a new article in Texas A&M’s The Eagle provides some amazing insight into the forthcoming Deeper than Swords exhibition at the Cushing Library, focused entirely on A Song of Ice and Fire and the many things that have been born from it. George R.R. Martin was invited to have his life’s work archived at the library back in 1993, in recognition of his contributions to science fiction and fantasy fiction and television, and has been a “dream donor” ever since.

Among the holdings in their archives:

‘‘More than 900 of the author’s books line the wall. The shelves are filled with Martin’s collaborative work, books he has edited, articles about him, manuscripts and correspondence.

“Intermingled with the paper products are VHS mastertapes, tickets from the Emmy Awards, boxes of trading cards, HBO tchotchkes given to actors, board games and programs for conventions where fans congregate to play board games. Nestled with the loot are life-sized replicas of Ned Stark’s greatsword and Robert Baratheon’s warhammer.”

Concerning the event itself, here’s what The Eagle has to say:

“The library’s exhibit, “Deeper than Swords,” will run from March 22 through December and is free to the public. An exhibit and author signing will last from 4 p.m. to 6 p.m. March 22 at Cushing Library. Tickets for a priority signing line are sold out, but a limited number of first-come, first-serve fans will be granted an audience. Food vendors offering medieval treats will be located outside the library, along with actors from the The Texas Renaissance Festival, who will host games to win tickets to the fall event.

“At 6:30 p.m. Martin will give a lecture and answer questions at Rudder Auditorium. More than 1,100 of the 2,400 seats are taken, and reservations can be made for the free event at the MSC Box Office.”

(Many thanks to Olaf Keith for pointing this article out.)

Courtesy of HBO, it looks like George R.R. Martin has taken the black:

This is pretty cool: George R.R. Martin has signed an overall deal with HBO, according to Deadline’s Neelie Andreeva.

What does that mean? Per the article:

... has signed a two-year overall deal with the pay cable network.
Under the pact, Martin will continue as co-executive producer on Game Of Thrones, whose Season 3 premieres March 31. Additionally, he will develop and produce new series projects for the network.

We’ve posted a newly-available video to the So Spake Martin collection from TIFF. Although released in December, it was recorded at a private “Master Class” talk in March. It’s lengthy, and quite excellent, and contains hints of things to come later in the series.

Make sure to also watch the “In Conversation” public event that was hosted the following (or possibly the prior) day, if you’ve not seen it before.

Awhile back, Locus Magazine—the venerable, award-winning SF/F publishing industries trade magazine —launched an “All-Centuries” poll regarding the best genre novels and writers of the 20th and 21st centuries. The results are in, and they’re looking pretty good for the work of one George R.R. Martin:

Martin himself has remarked on the poll, adding his personal take on the 20th Century SF Novel list, which would have had Zelazny’s Lord of Light, Bester’s The Stars My Destination, and Le Guin’s The Left Hand of Darkness in the top 3. Fantastic novels, all, well worth reading if you haven’t yet had the pleasure. 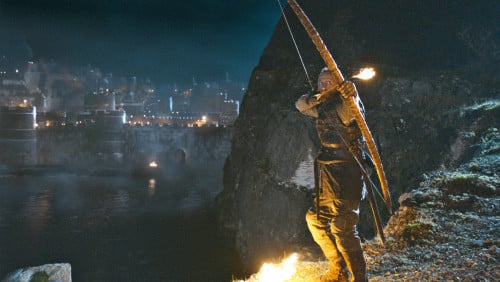 It’s hard to make an argument against that (though Matt Weiner and Vince Gilligan can surely make them), but the honor does come with a very nice “oral history” of the episode, from its conception to completion, as told by executive producers David Benioff and Dan Weiss, as well as GRRM and Marshall. Some interesting details along the way, and it’s well worth reading.

However, we can say that one detail in the article seems to be an error—or, at least, was not sourced from the participants. Writer Brian Rafferty writes toward the end that “Martin is halfway” through the sixth novel. We contacted Martin’s office about this detail, to verify it, and have been informed that GRRM made no such statement. It may have been a misunderstanding or a mistaken assumption, but in any case, GRRM has not stated that he is “halfway” done with The Winds of Winter, the sixth novel of the “A Song of Ice and Fire” series.