An interesting piece of news via The Hollywood Reporter, as it reveals that Marvel is adapting the first volume of Wild Cards, with the writing work being handled by Wild Cards veteran Paul Cornell and the art by Mike Hawthorne. Titled Wild Cards: The Drawing of the Cards, the first issue will be released in June.

Of course, this is not the first time Marvel has dabbled with Wild Cards... 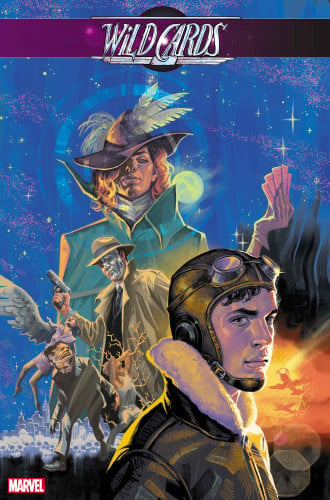 Sad news today, when it was announced that John Jos. Miller had passed away on January 5th. He was 67 years old.  A long-time friend and collaborator with George R.R. Martin and other members of the Wild Cards Consortium, Miller was a founding member of the Wild Cards group and extended his influence into the RPGs from which that shared universe sprang by writing Wild Cards source books for Steve Jackson Games and Green Ronin. 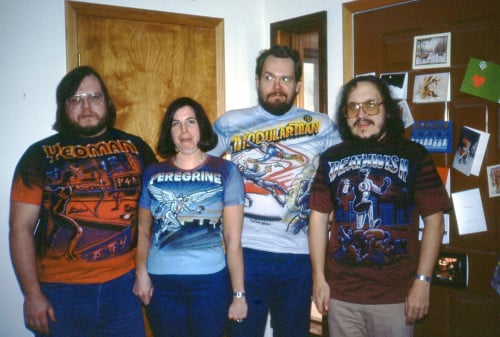 A vintage photo of Wild Cards writers in the wild, wearing t-shirts featuring some of their signature characters. From left to right: John Jos. Miller, his wife Gail Gerstner-Miller, Walter Jon Williams, and GRRM.

read on >>
Posted at 19:07 CET by Elio
Comments: | PermaLink
Background for Wild Cards Move to Peacock

About two weeks ago, we were the first to report that the long-gestating Wild Cards TV adaptation, originally set for Hulu, had moved to NBCUniversal’s Peacock. Now The Hollywood Reporter has filled in the blanks, providing details of what Hulu did with the project, why it moved from Hulu to Peacock, and what its current status is since the lead writer has moved on, and a new writer is currently being searched for.

Some salient quotes below:

Cover art by Brian Bolland for a re-release of the first edition.

An official website for the Wild Cards superhero shared-world novels, whose origins lay way back in 1983 with a roleplaying game campaign that George R.R. Martin devised, has now been launched. 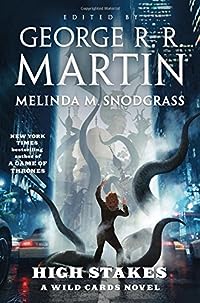 Of note are a number of initial blog posts from Martin and other members of the Wild Cards Consortium discussing various aspects of the shared world, from its inception and on down to recent days. It’s a good looking site, featuring a cover gallery, interviews, videos (including a 1988 recording of a Worldcon Wild Cards panel!), sample stories, and more.

The latest entry in the series is High Stakes, which was published this August.

Courtesy of Tor.com, Daniel Abraham’s original story set in the WIld Cards shared-world universe is now available on-line. “When We Were Heroes”  features Curveball and Bugsy, two characters introduced in the “new” Wild Cards trilogy that began with 2008’s Inside Straight. Tor.com suggests that this is the first of several stories George R.R. Martin has commissioned in the wake of the success of Fort Freak.

In further news, over at “Not a Blog” GRRM has noted that the follow-up to Fort Freak, Lowball, is nearly done, and that the third novel in this trilogy—High Stakes—will be in progress immediately after Lowball has been delivered to the publisher.

read on >>
Posted at 21:10 CET by Linda
Comments: | PermaLink
A Forum of Ice and Fire
The Citadel
Blood of Dragons