HBO’s official Game of Thrones social media channels have awoken to unleash the first concept art from House of the Dragon, featuring designs for two un-named dragons. We have some thoughts on just who they may be below…

The depiction of this dragon suggests it’s a young one, more similar in size to Daenerys’s dragons in the first half of GAME OF THRONES. By its coloring, we’re guessing this is a concept for Sunfyre, also known as Sunfyre the Golden. 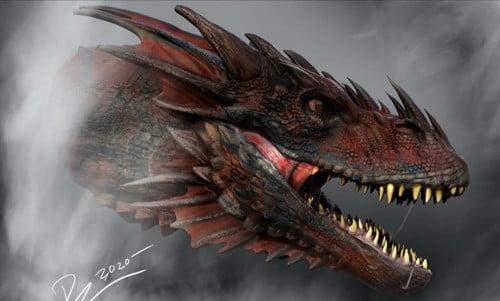 The coloring of this dragon, and the way it seems more mature than the other concept, suggests to us that this is supposed to be Caraxes, the Blood Wyrm, ridden by Prince Daemon Targaryen and used prominently in his wars to control the Stepstones and carve out a kingdom for himself.

The post from HBO notes that the show will go into production on 2021, suggesting at least a push back from earlier reports. We know that showrunner and lead writer Ryan Condal has relocated with his family to the UK to be nearer to the production, which will use the Warner Brothers Studio complex near London as its home base.