Yet again, HBO’s press release repeats this bit of information:

“Matt Smith as Prince Daemon Targaryen: The younger brother to King Viserys and heir to the throne.  A peerless warrior and a dragonrider, Daemon possesses the true blood of the dragon.  But it is said that whenever a Targaryen is born, the gods toss a coin in the air…”


“Rhys Ifans as Otto Hightower: The Hand of the King, Ser Otto loyally and faithfully serves both his king and his realm. As the Hand sees it, the greatest threat to the realm is the king’s brother, Daemon, and his position as heir to the throne.”

This—Daemon being heir when Rhaenyra is an adult and her brother Aegon is thus alive—is a very substantial change from the novels, as Rhaenyra was made her father’s heir as a girl when she was her father’s only child. In fact that is the real root of the conflict since she was placed ahead of her brother Prince Aegon even after his birth, which is why he who would claim the crown by ancient Andal custom (and the alleged precedent of the Great Council of 101) requiring a son to go before a daughter. By keeping Daemon as heir at this late stage, it would seem to us that they’re very much throwing that conflict out of the window. We’re guessing that Daemon and Rhaenyra are not wed at this time, but their marrying should hardly change anything if Viserys has for some reason still kept his brother as his heir rather than bestowing that on his daughter or passing her over in favor of his eldest son. We really don’t know what to make of it, especially as evidence from some of these photos from Cornwall suggest that Alicent definitely has children.

The only thing we can suppose is some sort of very radical realignment of the conflict, making the Dance of the Dragons end up as a conflict between Daemon and Rhaenyra. This seems wildly unnecessary to us, however, and would undercut the conflict between Rhaenyra on the one hand and Alicent on the other. Taking a conflict specifically framed by GRRM as one lead by two women primarily and moving one into the background is such an odd choice that we’re going to guess they have something else up their sleeves.

[The above two paragraphs have been updated to clarify what we meant by the big change, namely Daemon being heir when Rhaenyra is an adult, and Aegon is presumably a boy or teenager. However, we should add that it’s been suggested to us that the press release descriptions could refer to the situation at the start of the series, while for all we know the images we have are from the end of the season and that any number of years could be covered between them. While we’ve no evidence that the first season will cover multiple years in a go, we can’t rule it out as of yet.] 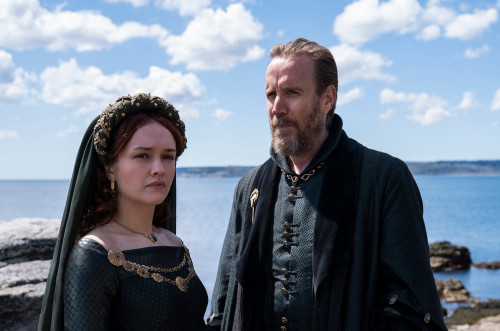 Olivia Cooke as “Alicent Hightower” and Rhys Ifans as “Otto Hightower”- Lovely customing on Alicent, with some striking jewelry and headwear, and of course the rich textiles (if often rather monochromatic) that are a hallmark of the series. Sadly, no hint of any obvious reference to the Hightower coat of arms, and we have Otto choosing to take after his daughter’s preferred green colors rather than using the sort of smokey greys touched with white and orange we might have expected. 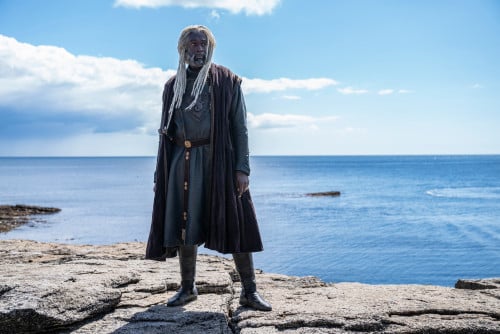 Steve Toussaint as Lord Corlys Velaryon, “The Sea Snake”. Obviously, Toussaint is the biggest departure from the canonical Corlys, given that Martin specifically noted he had not thought to make Valyrians black. It’s as yet unclear whether the show will explain this through some sort of Summer Isles or Basilisk Isles lineage or if the idea is that the Valyrian nobility were in fact multi-racial.

Unlike the others, the Sea Snake does feature his arms quite prominently, embroidered on his chest. Alas, it is yet another confirmation that they have used the wrong heraldic animal, presenting a mythical sea-horse rather than the very real seahorse Martin had intended.

House of the Dragon, adapting the events leading up to and including the Dance of the Dragons described in Fire and Blood (at the moment priced at just $5 in Amazon’s Kindle format, we notice) and our own The World of Ice and Fire, is currently filming in Cornwall after having started rolling cameras last week. We expect it’ll be a number of months before the filming is completed, with the first season airing sometime in 2022.